We give Purina Pro Plan SAVOR dog food a rating of 4.4 out of 5 stars.

The Purina Pro Plan SAVOR line of dog food features some of the most respected formulas in the pet food industry. With countless veterinary studies supporting its recipes, Purina fuels many of the nation’s top competitive sport and show dogs. The Purina Pro Plan line was also the first dry dog food to include meat as its top ingredient.

With all that said, is Purina Pro Plan SAVOR really the best option for your dog? If so, which of its seemingly countless formulas is the right one for your canine companion?

The Purina Pro Plan SAVOR line of dog food is quite extensive, with over 40 different formulas currently available. Here are a few of the most popular recipes out there:

Before we dive into popular Purina Pro Plan SAVOR recipes, let’s learn a little bit about the brand and its history. Here’s what you need to know:

Who makes Purina Pro Plan SAVOR and where is it produced?

Until 2001, Purina was an independently owned and operated pet food company. However, since then, it has operated under its parent company, Nestlé.

According to Purina, 99% of their products are manufactured in the United States. While that number is impressive, it’s unclear which products make up the 1% manufactured overseas.

Also, while Purina claims that most of its ingredients are locally sourced in the United States, the company does not specify exactly how many or which ingredients this statement applies to.

This #ProPlanDog loves enjoying the beautiful outdoors. Will you be joining him? #regram via @atlasthesiberianhusky

Which Type of Dog Is Purina Pro Plan SAVOR Best Suited For?

With so many formulas available, there’s a Purina Pro Plan SAVOR recipe for pretty much every dog. This line of dog food includes products for puppies and seniors, toy breeds and giant breeds, and grain-free and grain-inclusive diets.

The brand has only issued two dog food recalls in recent years. One occurred in 2013, when the company recalled a batch of dog food that was potentially contaminated with salmonella. The second took place in 2016, when the company issued a voluntary recall after discovering that several varieties of wet dog food contained inaccurate vitamins and minerals.

With so many different recipes under the Purina Pro Plan SAVOR umbrella, there’s sure to be a formula that suits your dog’s taste and nutritional needs. However, to get a better idea of where this dog food line sits in the competitive world of canine nutrition, let’s take a closer look at the popular formulas on offer: 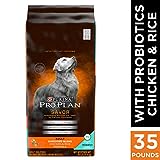 This formula is the most middle-of-the-road recipe featured in the Pro Plan SAVOR line, geared toward the average adult dog. It combines crunchy kibble pieces with tender meat for great texture and flavor. The ingredients list features chicken as the first ingredient, and each bag includes live probiotics to improve digestion and your dog’s immune system.

For a look at what other dog owners are saying about this formula, you can read the most recent Amazon reviews here. 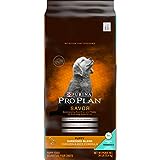 While the above formula is a great option for most adult dogs, young puppies and adolescents have unique dietary needs that might not be met by an adult-specific formula. The Purina Pro Plan SAVOR Puppy Shredded Blend includes important nutrients like DHA and calcium for developing brains and growing bones. It also includes an antioxidant blend for a boosted immune system.

This particular recipe contains 28% protein, 18% fat, 3% fiber, and 12% moisture. Similarly to the adult formula, one cup of the Puppy Shredded Blend contains 384 calories.

Since customer reviews are an important part of shopping for a new dog food, we highly recommend checking out this recipe’s most recent Amazon reviews to learn more. 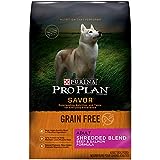 Many dog owners prefer to feed their pups grain-free food, and the Pro Plan SAVOR Grain-Free Shredded Blend is Purina’s answer to this demand. Unlike the other Pro Plan SAVOR recipes, this formula is developed without grains or soy. Beef is the top ingredient, and it still contains live probiotics and prebiotic fiber.

For this particular recipe, the nutritional breakdown includes 32% protein, 16% fat, 5% fiber, and 12% moisture. This formula also has a slightly higher calorie content than the grain-inclusive formulas, coming in at 433 calories per cup.

If you want to learn what other owners think about this grain-free dry dog food, we suggest checking out the product’s Amazon reviews.

What Others Are Saying

We’ve taken a closer look at popular recipes from the Purina Pro Plan SAVOR line, but what do other reviewers have to say about these formulas overall? Here are a few thoughts from across the web:

Dog Food Mentor: “Many dog owners like to avoid corn in grain-based dog foods; however, if your dog doesn’t have any allergies or digestion problems, there’s no reason to exclude it.”

Pet Fashion Week: “It’s worth noting, however, that this food may not be a good choice for dogs with sensitive stomach and skin as it contains corn, soy, and wheat, which are allergenic grains.”

Ideally, we’d love to see fewer plant-based protein sources, especially in the grain-inclusive recipes. With that said, these formulas all include whole meat as the first ingredient, and plant-based protein is not inherently bad for dogs in moderation. Also, the fact that Purina prioritizes flavor and texture in its Pro Plan SAVOR line means that these recipes are sure to win over even picky eaters.

Have you and your pup tried any of the Purina Pro Plan SAVOR products? If so, what did you think? Let us know in the comments below!