We give Blue Buffalo Puppy food a rating of 4.4 out of 5 stars.

Blue Buffalo was founded in 2003 when Blue, an Airedale belonging to the Bishop family, was diagnosed with cancer. Believing that feeding blue a nutritious dog food would be essential to his healing, the Bishops set out to interview several vets and nutritionists. The result of their research was Blue Buffalo.

Since then, the brand has been focused on creating high-quality dog food using natural ingredients. Their efforts have paid off, too, as they’ve quickly become one of the top natural dog food brands in the world.

Their efforts paid off monetarily, too, as they were acquired by General Mills for billions of dollars in 2018. The food is still made in the United States, and it’s still focused on quality (although there have been a few bumps in the road along the way — more on that later).

Blue Buffalo is one of the better foods out there, but it’s not quite up to the level of some of its competition.

At a Glance: The Best Blue Buffalo Puppy Food Recipes:

Who makes Blue Buffalo Puppy and Where is it Produced?

Blue Buffalo Puppy is made by Blue Buffalo, which started out as an independent holistic dog food company in 2003.

In 2018, however, the brand was acquired by General Mills. Despite their new ownership, Blue Buffalo retains much of the same commitment to high-quality foods and natural ingredients.

The company is based out of Wilton, Connecticut, and their foods are made in a variety of processing plants across the United States.

Which Types of Dogs is Blue Buffalo Puppy Best Suited For?

Any owner who wants to limit their dog’s exposure to common allergens like wheat, soy, or corn should consider Blue Buffalo, as should owners who don’t want their pups eating low-grade animal by-products.

Blue Buffalo is kind of an entry-level premium dog food. There are other brands that are better, but that are also more expensive.

If you’re committed to giving your dog the best nutrition no matter the cost, try Zignature High Protein Kangaroo Formula.

Real meat is always the first ingredient in any Blue Buffalo food. They usually use lean cuts for the primary protein source, but you’ll usually find that meat padded with meals of various kinds. Also, some recipes have a variety of animal sources, although the primary ingredient tends to dwarf the others.

It should be noted, though, that many of their foods pad their protein levels by using plant-based proteins. These are less beneficial to dogs than animal proteins, as they lack some essential amino acids.

You won’t find corn, wheat, or soy in their foods, as they instead rely on more complex carbohydrates like peas and tapioca. These should give your dog more nutrition and longer-lasting energy.

The company tries to put as many omega fatty acids in their foods as possible. This usually comes from some sort of fish source, like fish meal, fish oil, or the like. They use flaxseeds a lot for this same purpose.

While they don’t use grains, you’ll often find other common allergens in their foods. The most common culprits are eggs and white potatoes, which can cause digestive problems in some dogs.

“LifeSource Bits” are the company’s proprietary blend of vitamins and antioxidants that they put in many of their foods. These look like little burned chunks of kibble, but they’re actually great sources of nutrients.

Better yet, many dogs don’t seem to mind their taste at all.

Some of their brands — like their Wilderness line, for example — are packed with protein, fat, and other important nutrients. These foods rival those of just about any other brand.

Many others, though, are extremely lacking in key areas. As a result, you should always inspect the label before buying one of their products.

Their Safety History is Spotty at Best

The company is no stranger to controversy. They have an extensive recall history (more on that later), and the FDA has linked their food to a potential increased risk of heart disease. The evidence is far from conclusive, but it’s worth mentioning.

Also, the company was sued by Purina for false advertising in 2014. In the ensuing court battle, they were forced to admit that, despite claiming that they would never use animal by-products, many of their foods were filled with them.

Blue Buffalo swears they’ve changed their tune since, but that one incident is enough to call their integrity into question.

The biggest recall incident in their history happened in 2007. They were involved, along with over 100 other brands, in what has come to be known as The Great Melamine Recall.

Melamine is a chemical found in plastics that is lethal to dogs. Due to a mix-up at a Chinese processing plant, a wide variety of foods were tainted with this chemical. Thousands of pets died as a result of eating melamine-laced food; we don’t know if any died from eating Blue Buffalo, however.

In 2010, they had a recall due to elevated vitamin D levels, and five years later they were forced to recall chew bones on account of Salmonella contamination.

Their canned foods suffered several recalls in 2016 and 2017. One was on account of mold, another was due to bits of aluminum in the food, and the last one was because of elevated beef thyroid hormone levels.

Given that the company has only been around since 2003, that’s a lot of recalls in a short amount of time.

When reviewing Blue Buffalo’s puppy kibble lineup, three foods stood out to us: 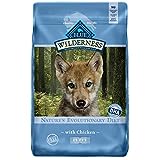 Wilderness is Blue Buffalo’s high-protein line, and this food certainly fits the bill. At 36%, it’s full of the lean proteins that your little dog needs to grow up strong and healthy.

A lot of that protein comes from peas, though, which isn’t ideal. There’s still quite a bit of meat in here (including chicken, fish meal, and chicken meal), but we’d prefer it if they’d excluded the plant proteins entirely.

You’ll find quite a bit of omega fatty acids in it, too. Omegas are essential for healthy brain and eye development, so you want your dog to get as many of them as possible.

This formula uses eggs and white potatoes, both of which can cause digestive issues in some dogs. If you feed it to yours, keep an eye on his poop for a few days to make sure he’s handling it properly.

Overall, the high amount of protein in this kibble earns it a strong recommendation from us. That doesn’t mean we don’t want them to make a few tweaks to the recipe. 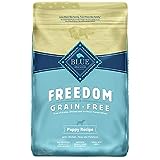 This food completely excludes gluten in addition to corn, wheat, and soy, so dogs with touchy stomachs should love it. For some reason, though, they filled it with potatoes and eggs, which can be very problematic for some dogs.

The protein and fat levels are at the higher end of average, though we’d like to see more of both in a puppy formula. It has lots of omegas, though, thanks to foods like fish oil and flaxseed.

The salt content is very high, and we’d love to see them dial that down a bit. They offset it a bit by including quite a few probiotics to calm your dog’s digestive tract.

While many dogs with sensitive tummies will thrive on this food, others may find it gives them gas. All you can do is feed it to your pup and wait with bated breath (and maybe your nose clenched).

This recipe is made with only a few foods, in the hopes that limiting the ingredients will also limit the risk of triggering a sensitivity.

Again, they insist on including potatoes. We don’t know why they’re so committed to potatoes (hint: they’re cheap), but we wish they’d swap them out for something else. If we were in charge, we’d also cut the salt content way down.

The good news is that there’s plenty of oatmeal and rice in here, both of which are excellent for soothing upset stomachs. There’s a good amount of fiber as well, thanks to the pea fiber, pumpkin, and chicory root inside.

There are some superfoods in here too, namely cranberries, blueberries, and kelp. All in all, this is an excellent food, and one which should give your dog everything necessary to be healthy.

Now if they’d just get rid of those darned potatoes…

Blue Buffalo makes very good puppy foods at a price that makes them competitive with other premium foods. They don’t use cheap fillers or animal by-products (supposedly), and real meat is always the first ingredient.

Still, there are other premium puppy kibbles that outperform Blue Buffalo in terms of nutrition. Also, the company doesn’t have the best safety record in the world.

Your dog will probably love Blue Buffalo, and it has all the nutrients he needs to be healthy. There’s a good chance you can find better foods if you’re willing to pay a bit more.

The Cavapoo is a designer breed, a cross between a…

If you’ve been dreaming of a small dog with the…