We give The Honest Kitchen dog food a rating of 4.8 out of 5 stars.

The Honest Kitchen makes dog food unlike any you’ve ever seen before. Rather than boring chunks of kibble or smelly old pâté, this food is made with dehydrated, human-grade ingredients. It makes feeding your dog a raw diet as easy and cost effective as possible.

The company was founded in San Diego in 2002, and the food is made at a cereal factory in Illinois. Despite its growing success, the company is one of the few dog food brands that hasn’t been bought by a huge multinational corporation, as it’s still owned by the original founders.

Their food isn’t for everyone. It’s extremely expensive, for one thing, and it may be unsettling to people who are used to more conventional kibble. Rather, it’s targeted at owners who demand the best for their pups — and who are willing to pay the price to get it.

At a Glance: The Best The Honest Kitchen Dog Food Recipes :

Who Makes The Honest Kitchen and Where Is It Produced?

The Honest Kitchen is a family-owned company founded by Lucy and Charles Postins in 2002.

The company is headquartered in San Diego, but the food is made in a factory in Illinois that also makes food for human consumption.

Which Types of Dogs Is The Honest Kitchen Best Suited For?

The Honest Kitchen makes dog food with human-grade ingredients, so there are no animal by-products, cheap fillers, or other questionable ingredients.

As a result, their foods are generally good for just about any dog, and they’re certainly better than the bargain-basement foods you find at the grocery store.

Which Types of Dogs Might Do Better With a Different Brand?

While we feel that just about any dog will thrive from eating foods from The Honest Kitchen, that doesn’t mean their owner can afford it. After all, a box of this stuff might represent a sizable portion of the family’s monthly grocery budget.

The box starts off with dehydrated chicken, ensuring that the formula is built on a healthy foundation of protein. After that, you’ll find a succession of healthy fruits and vegetables, including flaxseed, sweet potatoes, apples, and even honey.

What impresses us most about the ingredients list is the breadth of real, identifiable foods on it. Every single ingredient is something you could buy at the grocery store and eat yourself.

Pumpkin, kelp, cabbage, green beans, papayas are all here, along with other healthy foods. It’s an impressive shopping list.

Our biggest issue with this food is the fact that it doesn’t have any meat beyond the chicken. This keeps its overall protein at an average level; that’s not a huge deal, considering that this company clearly believes in well-rounded nutrition rather than stuffing as much meat in as possible, but we’d still like to see more lean protein inside.

This Food Is Dehydrated

You may balk at the price for a relatively small box, but keep in mind that you’ll add water to this food to “fluff it up” before serving.

Each box produces about four times its weight in consumable meals, which helps mitigate the price somewhat.

If you add warm water, your dog can have a piping hot, home-cooked meal, rather than munching on dry kibble. As a bonus, that extra H2O also helps stave off dehydration.

The Ingredients Are Diced for Superior Absorption

If your dog inhales their food, they may not be getting all the nutrients out of it, as it’s hard for their digestive systems to break down poorly-chewed food.

The Honest Kitchen anticipates that issue by dicing their food finely, ensuring that it’s more likely to be absorbed regardless of how much your mutt chews it. This ensures that your dog gets all the nutrition you paid for, while also making for tidier messes when the food comes out the other end.

Many Dogs Won’t Touch It

If your pooch has been raised on a diet of kibble, they may not know what to do with a food like this. Many dogs won’t even try it, so even though it’s incredibly healthy for them, all that nutrition is worthless if they won’t eat it.

A Quick Look at The Honest Kitchen Dog Food

In February 2013, the company initiated a voluntary recall of some of its foods due to concerns of potential salmonella contamination. This is the only recall we were able to find in their modest history.

Reviews of the 3 Best The Honest Kitchen Dog Food Recipes

The Honest Kitchen is a young company and doesn’t have quite the extensive product line of more established dog food operations. Nevertheless, we reviewed three of our favorites in more depth below. 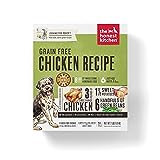 This is one of their basic recipes, as it’s made with chicken and multiple fruits and veggies.

The overall protein level is average at 24%, but this food is designed to offer a broad spectrum of nutrients, not just protein. It has a decent amount of fat at 15%, and the fiber levels are good (6.5%).

There are several so-called “superfoods” in this recipe, including kelp, sweet potatoes, and flaxseed. These foods should give your dog a ton of antioxidants, helping to keep their immune system in fine working condition and combating inflammation.

The only ingredient we’d take any sort of issue with is the white potatoes. These don’t offer much, nutritionally speaking, and they often give dogs gas. 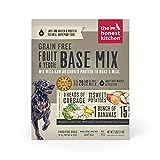 This food is a little different from most in that it doesn’t have any meat in it at all — you have to add it yourself. Instead, this base offers all the other stuff your dog needs to be healthy.

While it’s a bit more of a hassle, we like being able to add our own meat, as it gives owners a ton of control over the quality of the food. You can pick a food that your dog likes (or change it up!), and you control the portion sizes.

The non-meat ingredients are impressive too. Sweet potatoes are the first ingredient, and it also has spinach, coconut, kelp, and peas, just to name a few.

The fiber levels are pretty high at 8%, and the base offers 10.5% protein before you even add meat. The fat levels are extremely low, though, so you may want to throw in a fattier meat like beef to balance it out.

There’s no grains or glutens in here to potentially offend your dog’s sensitive stomach, making it great for dogs with allergies.

Overall, if you’re willing to work a bit harder, this base represents a solid first step toward making the perfect dog food. 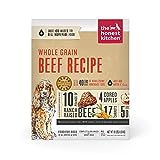 This beef recipe represents a kind of middle ground between the two foods above, as its protein, fat, and fiber levels sit smack-dab in between the other two formulas.

One big difference is that this food includes grains like oats and barley. Most dogs won’t have a problem with that — in fact, they tend to be quite easy on the stomach — but if your pet doesn’t tolerate gluten, this food can cause problems.

There are eggs along with the steak, helping to increase the amount of protein, although it still sits at a disappointing 22.5%. We appreciate that they add extra taurine, though, as that’s excellent for heart health.

The fruits and veggies are just as solid as they are in the other foods, although this recipe includes cranberries, carrots, and parsley. At the end of the day, the greens in here are hard to beat — they’re the same greens as in the other two bags.

If you’ve been considering switching your dog to a raw food diet but lack the time, energy, or know-how to do it right, The Honest Kitchen makes it easy as just adding water. Its recipes are extremely healthy, as they’re made with human-grade ingredients and real, identifiable foods.

The food isn’t without its flaws, however. It’s incredibly expensive (although likely still cheaper than a DIY raw diet), and many dogs don’t quite know what to make of it. It’s also lighter on protein than we’d like, but that’s something you can easily remedy.

Overall, we feel that The Honest Kitchen is one of the best and most innovative dog companies around, and its foods offer everything a pooch needs to grow up strong and healthy.

Given the high-quality ingredients they use, the hardest thing about using this food may just be resisting the urge to eat it yourself.

The charismatic Affenpinscher & Yorkshire Terrier mix can be described…

When it’s time to choose a dog name, why not…

The Irish Red and White Setter is the lesser-known cousin…