We give Purina Bright Mind dog food a rating of 4.0 out of 5 stars.

Purina is one of the biggest names in dog food, and if you’ve ever wandered into any pet food aisle, you’ve likely seen dozens of their products gracing the shelves.

The company was originally founded under the name Ralston Purina in 1894 to feed farm animals but entered the pet food game in 1926. They quickly became one of the biggest behemoths in dog food, and in 2001 Nestle acquired the company for $10.3 billion, merging it with their own pet food line, Friskies PetCare Company.

Today, Purina is the second-largest pet food company in the world, and they have an incredible array of pet food lines. Most of their dog food is made in the United States, with processing plants in Minnesota, Wisconsin, Missouri, and New York.

Who makes Purina Bright Mind and Where is it Produced?

Purina Bright Mind is made by Nestle Purina PetCare as part of its Pro Plan line. The food is manufactured in different plants in the United States.

Which Types of Dogs is Purina Bright Mind Best Suited For?

As the name suggests, Bright Mind is a kibble that’s specially-designed to improve mental performance, making it a good choice for senior dogs (or any dogs that you think need all the help they can get in the thinking department).

The Bright Mind recipes use a lot of filler grains like wheat and corn, plus they include animal by-products, so if you’re wanting to feed your dog a cleaner diet, you may think about going with something like The Honest Kitchen Human Grade Dehydrated Organic Dog Food instead.

The first ingredient is a lean protein, usually chicken. This starts the recipe off on firm footing, as most dogs need to eat a diet that’s protein based.

After that, things get a little dicey. The next ingredient is whole grain wheat, which fills out the kibble while also keeping the price down. Unfortunately, wheat is full of empty calories, and many dogs have trouble stomaching it.

Next is poultry by-product meal. We should distinguish this from poultry meal, which uses internal organs that are full of essential nutrients; while by-product meal also includes this meat, it combines it with meat by-products, which are about as appetizing as they sound. Simply put, this is meat that likely should have been thrown away.

After that, the ingredients seem to alternate between good and bad. The good include fish meal, oatmeal, dried beet pulp, and fish oil, while on the bad side we have corn gluten meal, animal fat, dried egg product, and animal digest.

Purina Bright Mind is Heavy on the Omega Fatty Acids

Omega fatty acids are important to keep a dog’s brain sharp into old age, and this recipe doesn’t disappoint in that regard.

It’s full of omega-rich foods like fish meal and fish oil, so it should give your pup’s noggin all the support it needs.

There Are Lots of Nutrients in Here to Promote a Healthy, Shiny Coat

Omega fatty acids are also good for keeping your dog’s coat nice and glossy, but Bright Mind goes one step further by adding plenty of vitamin A.

Vitamin A also helps soothe irritated skin, so if your dog has problems in that regard, this food may help.

There Are a Lot of Questionable Ingredients Inside

Many dog foods have one or two ingredients that we wish had been left out, but Bright Mind has quite a few more than that.

Most of them are off-set by the inclusion of high-quality foods, but that doesn’t change the fact that you’ll find cheap fillers, animal by-products, and other suspect ingredients in each bag.

What’s worse is that most of those foods are used to keep the price down, but this food is middle-of-the-road at best in terms of price.

We were unable to find records of the Bright Mind line suffering any recalls, but the Purina brand has been associated with two other recalls in the past ten years.

The first occurred in August 2013, when the Purina One Beyond line was recalled due to a possible Salmonella contamination. There was only one bag that was found to be contaminated, and there were no injuries or deaths associated with eating the food.

In March 2016, the company recalled their Beneful and Pro Plan wet foods because they believed a batch that did not have a suitable amount of vitamins and minerals. The food was not considered dangerous, and there were no issues reported from eating it.

The Bright Mind line is relatively limited, with only a few recipes to choose from. To give you a better idea of what’s in the food, we took a closer look at three of the most popular formulas: 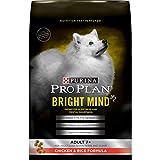 To say that this food is a mixed bag is a bit of an understatement.

On one hand, you have some truly sensational ingredients in here. Real, lean chicken is the first food listed, and there’s also fish oil, fish meal, dried beet pulp, and plenty of vitamins and minerals inside.

That should give your dog everything he needs to stay sharp and healthy, regardless of his age. Plus, it will keep his skin healthy and his coat shiny.

On the other hand, there are a lot of cheap or downright nasty ingredients in here. The cheap ones are the fillers like whole grain wheat and corn gluten meal, and the nasty ones are the animal by-products. They’re filled with all the meat that should have been thrown away; your dog won’t mind them, but you might.

Still, there’s enough good in here to be worth recommending, but it’s hard for us to understand why they’d include so many cheap ingredients when they clearly understand the value of using better ones. 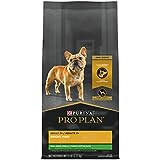 In keeping with what seems to be a Bright Mind theme, the small breed formula adds in a few quality ingredients that the regular kibble lacks, but counterbalances them by including a few losers, too.

The biggest addition is vegetable oil, which adds even more omega fatty acids. They also move the grains down the ingredients list a few spots, and as a result this kibble has more fiber than the other line.

The kibble itself is smaller and easier for little dogs to crunch, which is especially handy for seniors.

However, there’s a lot of fat in here (something the vegetable oil contributes to), and smaller dogs can’t really afford to carry any extra pounds. There’s a little more salt than we’d like to see, too.

Little pups should enjoy this food, and you’ll likely see an improvement in their mental health as a result of feeding it to them. We just hope they don’t pay for it when they step on the scale. 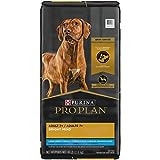 This recipe has as much protein as the small breed formula, but with less fat, which should help keep bigger pups from adding too much weight to their frames.

For some reason, though, they added grain to this one; specifically, whole grain corn. We assume it’s to help bigger pooches feel full, but given that corn is full of empty calories, that feels like a Pyrrhic victory.

The poultry by-product meal moves up a few spots in the ingredients list as well. This adds more protein, but it also increases the amount of “you don’t want to know”-style ingredients inside.

Like the other recipes, this is a great food if your main concern is your dog’s mental health, but you may have to sacrifice in other areas as a result.

Purina Bright Mind is a food that’s focused on improving your dog’s brain function, and it’s very good in that regard. It’s filled with foods that are rich in omega fatty acids, and the manufacturer adds vitamins and minerals that are essential for cognitive function as well.

Unfortunately, they undo some of their good work by adding cheap fillers like wheat and corn. They also use a ton of animal by-products, which are low-quality meats that you likely don’t want your dog eating.

If your pup is showing signs of slowing down upstairs, Bright Mind may be just what the doctor ordered. Just know that you’ll be feeding him a lot of stuff he’s better off not eating as well.

Shiffons are the ultimate lapdog, coming from two breeds that…

The Foodle is the puppy product of the Toy Fox…

The winter season certainly has its own charm, which almost…