We give Merrick Grain Free dog food a rating of 4.6 out of 5 stars.:

It all started with a hungry dog. Merrick Dog Food was born in founder Garth Merrick’s kitchen in Hereford, Texas, in 1988. Merrick wanted to give his dog the best food possible, which meant cooking for her himself. Soon, he realized that his recipes were delicious and nutritious enough that he could sell them — and his new dog food company took off like a shot.

While he’s cooking for a lot more than one pooch now, Merrick still uses natural, high-quality ingredients as often as possible. The company also pairs with animal shelters and other dog-related charities to give back to the community.

Merrick’s grain-free line was started to accommodate dogs that have difficulty processing corn, wheat, and other grains, and it’s become a favorite of owners who don’t want to feed their dogs a bunch of empty calories. This is one of our favorite grain-free foods, but it’s not without its flaws, as you’ll see below.

Who Makes Merrick Grain Free Dog Food and Where is It Produced?

Merrick Grain Free Dog Food is made in Hereford, Texas. It started out as a private label, but in 2015 the company was acquired by Nestle Purina PetCare Company.

Which Types of Dogs is Merrick Grain Free Dog Food Best Suited For?

This food is good for dogs that have sensitive stomachs, as many grains can act as allergens.

Grains can also be filled with empty calories, so it’s a smart choice for pups that are struggling to maintain a healthy weight.

Other dogs should do well on it, too, as they’ll find it easier to absorb the nutrients without all those filler grains inside.

There’s not much fiber inside this food, so dogs that struggle to use the bathroom might need something with a bit more roughage in it, like Blue Buffalo Wilderness High Protein Grain Free Natural Adult Healthy Weight Dry Dog Food.

Before we can talk about what’s in Merrick Grain Free, we should recognize that this food is notable for what it lacks: namely, corn, wheat, and other cheap grain fillers.

Those foods offer lots of calories and little nutrition, and omitting them leaves plenty of room for the foods that did make it inside, like high-quality meats and more nutritious vegetables.

There’s usually a variety of protein sources in each bag, with the primary food (the one listed on the bag) being the first ingredient. Beyond that, there’s a variety of organ meat, animal meals, and animal fats inside, giving your dog a ton of essential vitamins and minerals.

The most common vegetable used in this line of food is sweet potato, but there are also peas, apples, blueberries, flaxseed, and more.

Many of the recipes in Merrick’s grain-free line are high in salt, so monitor your dog to make sure he’s not adding water weight or drinking excessively.

When Garth Merrick began making his food, he relied on food that was locally available.

The company tries to stick to that principle as much as possible now that the food is mass-produced, and most of the ingredients (especially the meats) are among the highest-quality you’ll find anywhere.

Merrick Grain-Free uses all sorts of meat in their recipes, including animal meals, organ meats, and various fats. This gives your dog nutrients he can’t get from lean cuts of meat alone.

These foods are only about 3.5% fiber, which is fairly low, especially among higher-grade foods.

Your pup should still absorb more nutrients than he would from a grain-filled kibble, so it’s a bit of a wash, but we’d like to see more fiber added in the future. You might want to add a topper or some fruits and vegetables to give your dog a little more roughage.

The Merrick brand has never had a recall on any of their kibbles as far as we can tell, but there were several voluntary recalls on their treats in the past ten years.

The first occurred in 2010, as several of their beef treats were recalled for possible Salmonella contamination. The first recall happened in January of that year, but there were several more subsequent recalls the rest of the year and into 2011.

No animals were reported to be ill as a result of eating the treats.

There was another recall in 2018, this time for elevated levels of a naturally-occurring beef thyroid hormone. This wasn’t believed to be life-threatening, but one dog did get sick from the treats; he later fully recovered.

There are several different recipes in the Merrick Grain Free line. Below, we took an in-depth look at a few of our favorites: 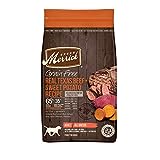 This is the “standard” version of this food, and it’s available in a wide variety of flavors, including chicken, duck, bison, beef, rabbit, and more.

The food has a 70/30 balance of meat proteins and fresh produce, with about 38% of each calorie coming from protein. That’s a very high ratio, making this food excellent for active dogs that need to build lean muscle.

It also has several “superfoods” like blueberries, flaxseed oil, and salmon oil, all of which give your dog a host of antioxidants. This can slow down the aging process, boost the immune system, and nourish his coat and skin.

It has more salt than we’d like, and the food needs to be sealed tightly to prevent spoilage. 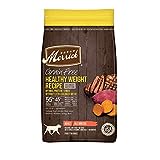 If your pooch is sporting a bit of a paunch, it may be a good idea to switch him over to Merrick Grain Free Healthy Weight.

This food has a bit less protein than the regular variety, but it makes up for it by adding more fiber, which should help your dog pass some of that extra bulk.

It also has added glucosamine and chondroitin, both of which are essential for healthy joints. Since larger dogs usually suffer from joint problems, those added nutrients are a nice touch.

Just be aware that, if your dog isn’t used to a higher-fiber food, you may have to deal with some messy bathroom trips for a bit. Also, like anyone on a diet, your pup might grumble about the small portion sizes. 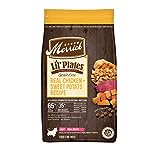 Tiny pups can enjoy proper nutrition too, thanks to the Merrick Lil Plates line. This kibble is very small, which makes it easier for little mouths to eat it. It’s also specially-designed for small and toy breed dogs.

In addition to being grain-free, this recipe is also gluten-free. This should help keep the extra pounds at bay, which is important because little dogs really don’t have any room for added weight.

It’s also loaded with pre- and probiotics, which helps with digestion. Your dog should be able to better absorb the nutrients from this food after eating it for a while, and you may even see a reduction in the amount of waste he produces.

Like the flagship grain free recipe, this food is high in salt, and it’s also fairly expensive.

Merrick Grain Free is certainly a high-quality dog food, and it’s one that should be suitable for just about any pup — including those without sensitive dispositions. However, it’s the dogs with finicky stomachs that should enjoy it the most, as it can provide them with all the flavor they need with less risk of upsetting their digestive system.

This is pricier than some other foods out there, but that’s because the company skipped cheap fillers and replaced them with premium ingredients. If you want a food that will actually get digested instead of just running right through your dog, this is one to try.

His name will make you smile. The antics of the…

The Saint Dane is a mixture of two of the…

Reaching heights of up to 26 inches at the shoulder,…