Merrick Dog Food started in Hereford, Texas, in 1988, when the founder, Garth Merrick, began making home-cooked meals for his dog. He quickly found he had a knack for making healthy, nutritious foods pets loved, and his operation expanded from making single meals in his home kitchen to mass-producing food for dogs all over the world.

The company still uses fresh ingredients wherever possible, and gives back to animals by partnering with animal shelters and other charities. Their food isn’t cheap, but it’s created for owners who are willing to spend a bit more to give their dogs a healthy meal.

We’re big fans of Merrick, as their foods tend to be high in protein without also having problematic ingredients like grains. There’s just one issue we have with most of their foods that hold us back from recommending their foods as much as we could — read on to find out what that is.

At a Glance: The Best Merrick Dog Food Recipes:

Who Makes Merrick Dog Food and Where is It Produced?

Merrick started out as a privately-owned dog food label in 1988. It was founded by Garth Merrick out of Hereford, Texas, and the food is still manufactured there today.

In 2015, the brand was bought by the Nestle Purina PetCare Company, which makes a wide array of other foods, including Alpo, Purina One, and Beneful. Despite being acquired by new ownership, Merrick claims that no changes have been made to their operations, and that they continue to operate independently.

Which Types of Dogs is Merrick Dog Food Best Suited For?

Merrick is a high-end dog food that’s filled with organic ingredients as much as possible. Each recipe is high in protein, with a mixture of plant and animal sources.

As a result, most dogs should do well on it. It’s especially good for active pups.

However, given its reliance on premium ingredients, it’s a pricey food, and may be too expensive for some owners to justify feeding to their dogs.

While each food has a high amount of protein, it derives a fair amount of that protein from plant-based sources. As a result, they’re typically high in carbohydrates as well, and so Merrick might not be the best choice for pups that need to drop a pound or two.

Those dogs might be better suited on another high-protein food with fewer carbs, like Wellness Core Rawrev Natural.

We definitely like how the foods start off with so many animal-based protein sources, as they represent the bulk of what your dog should be eating. Protein meals are important, too, as they include a wide variety of meat sources (like organ meats) that have nutrients your dog needs.

The fruits and veggies are good, too, especially ones high in omega fatty acids like flaxseed and blueberries. These ingredients round out the nutritional profile a healthy dog needs, although they shouldn’t be the cornerstone of a pooch’s diet.

Our biggest issue is the inclusion of several plant proteins, such as pea protein or potato protein. While we’re generally of the opinion that the more protein, the better, adding it in from plant sources is a way to pad the numbers while keeping the company’s bottom line low.

The end result is more carbs in your dog’s food. If you have an especially active pup, this shouldn’t be an issue, but older or sedentary dogs may find that it increases the risk of obesity (and all the issues that accompany it).

Merrick Uses Real, Whole Foods as Much as Possible

We definitely appreciate the company’s dedication to natural food. Every recipe begins with real meat — the meat is high-quality and USDA-certified. This is important for owners that want to be sure they’re feeding their pups the healthiest food possible.

Likewise, the fruits and veggies are fresh and whole, which retains as much of their nutrition as possible. They’re not organic, but they’re as high-quality as possible.

Many dogs have issues digesting certain grains, especially corn and wheat, so Merrick doesn’t include those and other grains in most of its recipes. In their place, they use higher-quality foods like brown rice, flaxseed, and quinoa.

Not only does this make it easier for your dog to digest, but it also provides more complex carbohydrates, giving your dog longer-lasting energy.

Towards the end of the ingredient list on any bag of Merrick food you’ll see things like taurine, biotin, and more. These are essential nutrients that any dog needs to stay healthy, but many pups struggle to get enough from their food alone.

Thus, Merrick gives them an extra boost to make sure they meet their mark.

Not only that, but you’ll also find a variety of live probiotic cultures, which can help improve your dog’s digestive tract. This can keep them regular, improve their absorption of nutrients, boost their immune system, and best of all (for you, anyway), improve the quality and smell of their waste.

Merrick is High in Carbs and Fat

While we love the fact that most Merrick foods have quite a bit of protein in them, they’re also high in carbs and fat, as those make up about 75% of each calorie.

This isn’t necessarily a bad thing in and of itself, but it does mean that your dog will need to stay active to avoid packing on the pounds, as excess carbs and fat get stored as fatty tissue if your dog doesn’t burn them off promptly.

This makes Merrick a good food for dogs that get a ton of exercise, but couch potatoes and apartment dwellers might want something a little leaner.

Merrick recalled their dog treats in January 2010, and later expanded that recall several times in the same year. There was concern that several beef-flavored treats might have been infected with Salmonella, although no pets were ever reported to have gotten sick from eating the treats.

There were two more treat recalls in 2011, also for potential Salmonella infection. There were no reported illnesses associated with either recall.

In 2018, a wide variety of their beef treats were recalled due to the potential for elevated levels of a naturally-occurring beef thyroid hormone. One dog was reported to be ill from eating the treats, and that pet later made a full recovery.

The thyroid hormone isn’t thought to be life-threatening, yet it can have negative health impacts all the same. Merrick recalled the treats out of an abundance of caution.

To the best of our knowledge, there have been no recalls on any Merrick dry foods. Also, the company’s history of being proactive in regards to issuing recalls is reassuring.

Merrick makes a wide variety of foods in many flavors. To get a better idea of what you can expect from their food, we took an in-depth look at three of their most popular recipes: 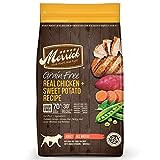 Available in a wide array of flavors (almost all of which combine a lean protein with sweet potato), this food has high protein levels with a good amount of fat.

In addition to the primary meat listed on the bag, you’ll also find fish and lamb meal, as well as various organ meats. This gives your dog essential nutrients that can only be found in those sources.

The kibble is both grain- and gluten-free, which should eliminate two common allergens. Also, this may help keep your dog’s weight down, as those are often sources of empty calories.

This food uses a lot of potatoes, though, which can give some dogs nasty gas. Also, you’ll need an airtight storage container for it, as it can go bad quickly if not properly sealed. 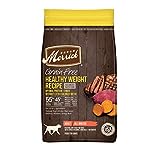 Closely related to the grain-free formula above, this recipe is specially-designed for dogs that need to drop a pound or two. As a result, it’s extremely high in protein, which should give your dog all the energy he needs without creating lots of extra blubber.

The fat content is relatively low, which may be good if your dog is fairly lethargic. It’s not too low, though, which is good, because you’d rather see a good amount of fat than a ton of carbohydrates.

There’s meat from cows, chickens, turkeys, and fish, giving your pooch a nice, broad nutritional profile. The recipe is heavy on fruits and veggies as well, including superfoods like blueberries and flaxseed.

Our biggest issue with this food is the high salt content. That’s unfortunate in a weight-control recipe, but it’s not high enough to disqualify the food altogether. 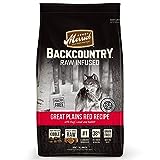 Merrick’s Backcountry line uses the same kibble as many of their other grain-free recipes, with one key difference: it has chunks of freeze-dried meat mixed in.

This obviously raises the amount of protein in each serving, while also giving it a flavor dogs are more likely to enjoy. And since the meat is raw, you don’t have to worry about any essential vitamins and minerals leaching out during the cooking process.

Feeding your dog this food (or something similar) is a great way to dip your toe into the raw food diet craze without having to commit to all the research and food prep that goes along with it.

This is also one of Merrick’s premium brands, so expect to pay premium prices for each bag. Also, you’ll need to wash your hands after handling the food to reduce the risk of food-borne illness.

Merrick is one of the better brands of dog food on the market today, as the company spends a lot of time finding and including the highest-quality ingredients possible.

Special care is given to keeping the protein levels in the food high, although they sometimes rely too heavily on carb-heavy plant proteins in order to do so. The manufacturers are also diligent about trying to weed out as many possible allergens in their food as possible.

While you might be able to find better foods, it’s unlikely that you or your dog will complain too loudly about Merrick foods. They provide excellent nutrition and flavors that dogs seem to enjoy, and so they’ve earned our endorsement here.

German Shepherds have gone through one of the most drastic…

The Gerberian Shepsky may just be the ultimate working dog.…

The Labernese is one-half America’s favorite breed, the Labrador Retriever.…