Males and females of any species tend to display different personalities, habits, colors, and sizes.

Golden retrievers vary in many characteristics depending on their gender. Some traits are typically seen in the breed regardless of if they are male or female, however. Once you’ve decided on the breed you want, the next important thing to consider is whether to add a boy or girl to your household. Let’s go over key points.

Consistent Facts About the Breed Overall

Golden retrievers are quite the common breed choice among families, ranking third on the American Kennel Club’s breed popularity list. Goldens are common for many wonderful reasons. They have credibly docile, friendly temperaments. They aren’t aggressive, and they don’t have high prey drives, so they can make a smooth transition to multi-pet households.

Because of their versatility, they fit in with many lifestyles. They are calm enough to be apartment dwellers, as long as you can provide adequate exercise, and they do equally well in a suburban, country, or farm setting. Because of their mildness and good nature, they make ideal pets for seniors or in homes with infant children.

They tend to be easy to train and respond well to positive reinforcement. Many dogs can undergo training to become service or therapy dogs. They are intuitive, caring, and responsive. All these qualities can be found in either gender, so you can’t really go wrong with the breed.

Both genders have the same life expectancy, averaging 10 to 12 years. They also suffer the same potential health concerns like obesity, hip dysplasia, skin conditions, and cancer.

While each dog will be their own individual, males tend to be more hyper than females. Females calm and mature faster. Males usually take a little longer to grow up. If you have little ones who love to romp around, a boy Golden to grow up with may be a ton of fun. They can match their get-up-and-go energy.

However, if you prefer a more laidback style, having a female would be a better choice. When it comes to children, females tend to have a more naturally maternal instinct, making them fantastic nanny dogs. If you have a low-tone vibe in your home, getting a boy who would add more chaos may not work out as well. 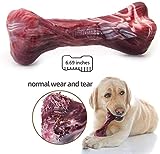 Of course, puppies aren’t puppies forever. Even if a male may take a little longer and require more patience when it comes to growing up, this doesn’t mean they won’t make fabulous companions. As a whole, they aren’t categorized as being an inherently hyper breed. Golden retrievers are family-oriented, loving, and loyal, despite gender.

When it comes to how big your dog will grow up to be, they do have a bit of a variance. Female golden retrievers tend to be smaller, weighing an average of 55 to 65 pounds. They typically stand 21 to 22 inches high from ground to shoulder. Their male counterparts, on the other hand, weigh between 65-75 pounds and get up to 24 inches in height.

While there is a 10-pound differentiation, the size between the two isn’t extreme. So, this small slight may not be enough to persuade you toward one side or the other.

Female golden retrievers tend to be freer thinkers. They have more confidence and independence. Because of that, they may not be as affectionate as a male. Males tend to be a bit needier with their family companions. Females may also gravitate toward one person or another, but this doesn’t mean she won’t love everyone in the home.

A female’s poised nature may make them a bit more stubborn in terms of training. Since they have a mind of their own and their own agenda, they may need a bit more convincing. However, since the breed is so eager to please, good behavior comes with proper training for either gender.

These qualities are strictly a matter of preference. Some families or individuals who would prefer a dog who can handle themselves and don’t require so much reassurance would fare better with a female. Conversely, families who want a constant companion may prefer a male.

As you can see, there are likenesses and differences just within gender-specific parameters alone. Let’s recap:

Since Goldens are such famously terrific dogs, there’s no way to go wrong when choosing one. An excellent way to decide is to find a reputable breeder with a healthy litter. Set up a meeting, and see which of the puppies speaks to you most. You may be surprised at how much gender may not matter when you find the perfect fit.