While the Flat-Coated Retriever may not be as popular as their Golden cousins, the two have many similarities. However, when it comes to choosing an ideal candidate to join your family, you’ll want to make the right choice. From personality to physical attributes, let’s go over how these beautiful dogs are both alike and different so you can get a feel on which one works best for your lifestyle.

As their names suggest, the coats are what really separates these dog breeds. Each breed has distinct coat coloring that separates it from other hunting retrievers. Flat-Coated Retrievers have shiny black coats that, as you’d expect, lie flat. They also have distinctive long heads. Golden Retrievers have thick, golden double coats.

Other than that, these dogs look similar due to their happy expressions and soft features.

The Golden Retriever has come quite a long way from their origin in Scotland, becoming a household favorite for so many families. The Flat-Coated Retriever had their beginning in Great Britain and made their way into the AKC sooner than the Golden. They became part of the club in 1915, 10 years before the Golden Retriever in 1925.

Both of these dogs were given hunting job roles to retrieve waterfowl and small land animals. These dogs have especially gentle mouths, not bruising or harming the muscle in the downed animals.

Golden Retrievers went on to become one of the most revered family dogs of all breeds. While less common, ranking 91st on the AKC popularity list, Flat-Coated Retrievers are still beloved dogs for their friendly, docile dispositions. Both dogs have participated as show dogs.

There are quite a few personality traits that the two dogs share. They are both naturally happy, sweet-tempered dogs who have an intense adoration for humans. They blend in well with many different types of lifestyles. Each would do just as well as an outdoor adventurer or in-home companion.

They are both playful and outgoing. They tend to like children and get along with most other pets. Because of their hunting roots, they may be a little prone to play-chasing. But neither breed is aggressive or violent with people or animals.

While each breed is intuitive with your emotions, Flat-Coated Retrievers seem to be a little more emotional themselves. They don’t like disruption to their everyday routine and may not understand things as well as a Golden Retriever. Both fare better with positive feedback and will be easy to correct if their behavior isn’t favorable.

The AKC refers to the Flat-Coated Retriever as being the “Peter Pan” of the dog world — staying forever young and light-spirited. They are humorous, playful, and always cheerful to be around. The Golden Retriever is equally pleasant. However, they do take their work seriously if you give them a job to do.

Flat-Coated Retrievers can handle spending a portion of their day alone. They can find things to occupy their time and seek entertainment in the form of toys — or your favorite shoes, if you aren’t careful. Goldens, on the other hand, become stressed if they spend too much time away from people. They do much better with at least one person home most of the time. 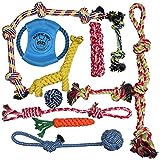 Both breeds do well with children of all ages and other animals. Both like other dogs, so having a companion for them is a positive idea. Neither dog would make an ideal watch or guard dog, as they are too amiable with people. So, while they may let you know someone is around, they won’t act to defend.

As the name implies, Golden Retrievers have coats that range in a shade of gold from cream to red mahogany. Flat-Coated Retrievers range from solid black to liver-colored. As far as proportion, each has similar fur distribution, with longer plumes around the ears, underbelly, and tail. Both require regular brushing and are average shedders.

Each of these dogs is sturdy and fit but prone to obesity. So, you must make sure to ration their food, so they don’t become overweight.

As previously mentioned, both dogs are retrievers in terms of work. This means they are each incredibly receptive to training and obedience. While the Golden Retriever thrives in duty, the Flat-Coat may be better left as a gundog or companion only.

Flat-Coats may excel in roles that require therapy, service, or other related work, but they are generally not used for this purpose. Because they are a bit more stubborn than their Golden cousins, they may not be as easy to teach either. But don’t underestimate their intelligence, as they are brilliant.

Golden Retrievers are widely used in work-related roles. They are excellent guide, service, and therapy dogs. For scent, they can be trained to pick up on diabetic reactions and notify the person of an oncoming attack. They can aid the blind and are wonderful companions for children and adults with various mental or physical disabilities.

Both breeds pick up on basic commands without issue. They are ideal candidates for tasks, and each thrives on positive reinforcement while learning. House training should also be an effortless thing for them to learn.

Flat-Coated Retrievers may sometimes have a significantly shorter lifespan but fewer health issues. They live an average of 8 to 14 years. The most commonly seen problem with this breed is cancer, which can come in many forms. They may also be prone to hip dysplasia and luxating patella, which are joint issues that plague many larger breeds.

Golden Retrievers have a vast array of health issues that they can suffer from between puppyhood to old age. Even though they are generally healthy, they can have many problems that develop over time. Commonly seen issues among the breed are allergies, hypothyroidism, cataracts, bloat, hip dysplasia, and progressive retinal atrophy.

However, the most well-known death-related issue in Goldens remains to be cancer. In the United States, over 60% of Golden Retrievers will die of some form of cancer. They live an average of 10 to 12 years in total.

The Bottom Line: Which Breed Should You Choose?

These retrievers are fantastic animals to make part of your family. While both would do excellently well in most environments, ultimately, you will need to choose based on your personal circumstances. As with any breed, there will be specific characteristics that will make one of them fit in with your home life better.

You can’t ask for a more brilliant, friendly, and fun-loving pair of dogs. So, whichever you choose, they are sure to fill your life with many years of laughter and positive memories.

Fearless and independent, the Norwegian Elkhound is an impressive dog.…

My Dog Ate a Chicken Bone! Here’s What To Do (Our Vet Answers)

Calls for advice on what to do when a dog…

The Bea-Tzu is a small, intelligent dog that is a…

Doggiedesigner.com does not intend to provide veterinary advice. Our goal is to help you better understand your dog; however, the writing on this blog is not a substitute for veterinary guidance. You can read more about this here.